I sat down this evening to work on the instructions and the prototype.  I realized I had omitted a resistor on the run/program switch.  I also decided to reduce the number of buttons and change the way the LED displays work.  For those who have been following the project, the original goal was two knobs, two LED displays and a dip switch for the interval.  I decided to eliminate the dip switches and found that the knobs were unreliable.  I replaced the knobs and dip switches with a series of menu buttons.  I also outlined the external voltage area to remind users that this could be high voltage.  I added some mounting holes as well.  I also marked pin 1 of several pin headers.

I was working through how those would function and realized that I had made it more complicated than it needed to be.  Programming is something you will do occassionally.  Why tie up so many pins on the processor?  Why use a more expensive, larger LED when a smaller one would do?  I opted for 2 buttons and a switch for programming.  Select the mode, run or program.  The buttons are next and inc.  Inc as in increment or up.  Each digit only has 9 options.  This makes it work like a dial on a lock, but minimizes the hardware involved.  Next moves from one digit to the next.   I relocated the two LEDs so I can make them pull double duty.  The Green and Red LED’s are for indicating where in the cycle the timer is at.  Green is for run, Red is for wait.  During progrmaming, Green will represent the on cycle, Red will represent the wait cycle.  The single digit will indicate which mode 1 through 4 (hmm maybe 1 through 9) and the 4 digit LED display will represent the duration 0000 through 9999.

okay, do we really need anything bigger than days on this?  Days could get really silly… so I’ll just stop there.  Besides, 9999 days ought to cover you.

So without further delay, here is what the boards look like now: 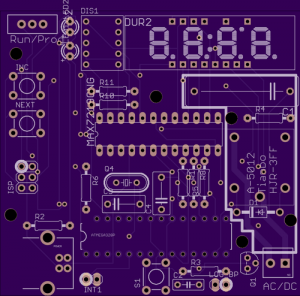 Should be in within 2 weeks.