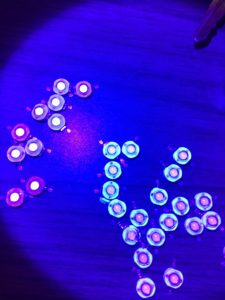 I ordered some 1 Watt and 3 Watt LED’s from AliExpress.  They were cheap, like 10 cents each.  Free shipping.  All good till they showed up mixed in an envelope.  In regular light they are identical in appearance.  Fortunately I had a small UV flashlight I had ordered.  I thought it was interesting and had ordered it for $5.

It turns out that the LED’s are vastly different in appearance under UV light.  This enabled me to quickly sort them.  You can see the 3 Watt LED’s on the left and the 1 Watt on the right.  I know the size based on the quantity I ordered.

I licensed Eagle 6.5 in 2013.  When I resumed designing boards this year it started bugging me to upgrade.  Figuring it would be disruptive I put it off.  Well, I went to finally upgrade this week and discovered that the ‘light’ license has no upgrade option.  It’s another $69 if they want me to upgrade.  Hmm, what do I get?  So I read the release notes and couldn’t find any useful improvements.  They certainly don’t seem to have fixed the things that irritate me the most about the program, such as:

As a bonus, the upgrade is one way for your files.  So if you open something in v 7.5 you “convert” the file and can’t go back to it with an older version.

I decided to stay put on v 6.5.  It works just fine and I haven’t found anything I need in the new version.

I had some time this evening to assemble a prototype for the power supply.  It immediately drew 1amp and started to blow up a capacitor.  Not good.  I’m not completely sure what was wrong.  The only deviation had been using a 1N5818 diode instead of a 1N5822 on the feedback circuit.  I don’t think this is critical and it looks like it’s used to bleed down voltage when the circuit is off.

There were a number of minor things wrong, so I incorporated some changes and made v1.2   The input/output headers weren’t labeled and were too close together for screw terminals.  The diode pads were drilled too small and too close together, i.e. I used the wrong package size.  I also didn’t like the input and output side by side.  I also changed the package layout for the IC.  I’m not going to bend the thing over on it’s side.  That’s silly for this application.

I ordered new boards from OSHPark tonight.  Should have them in a couple of weeks.

The new board layouts: 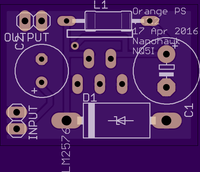 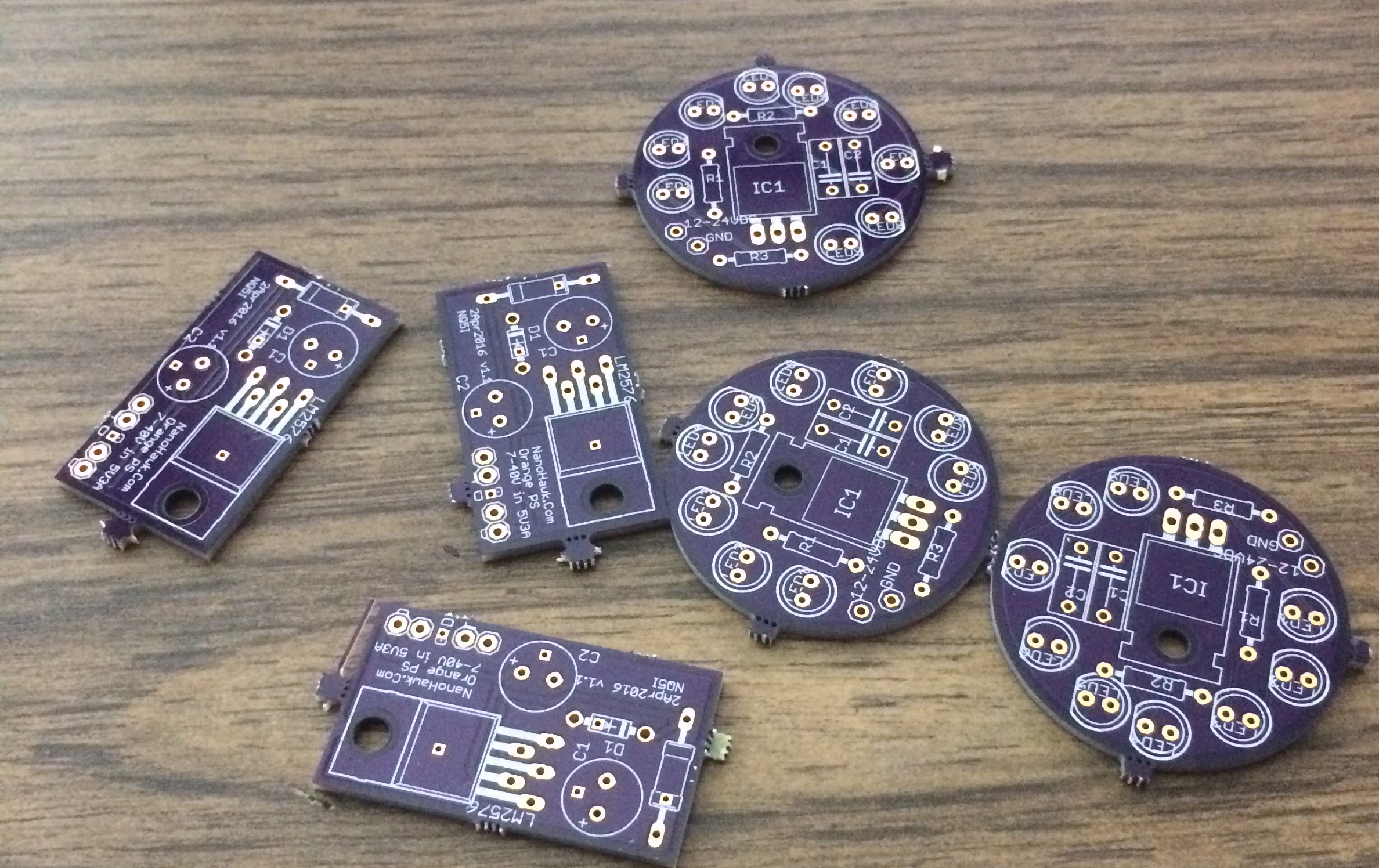 My boards from OSHPark arrived yesterday. They look fantastic. I was very tempted to put a bay-light together before bed. It’s my first round board. That’s when I realized I had not ordered the LM7512 12v voltage regulators. I made a quick check of the schemtatic and LED resistor calculator to confirm that I had designed the circuit with a 12v operating voltage. This provides more possibilities in terms of where it can be used than a 24v operating design.

So I skipped the critical part! There was nothing else to do but order them and wait. Tayda is celebrating the “water holiday” which means nothing happens until they get back. If I was in a hurry I’m sure DigiKey or Mouser would have had the part, but I’m not and I like Tayda. They have great prices, super accurate picking, and cheap shipping.

Now, my more astute readers may notice the square boards which are OrangePS v1.1. Those boards came in too and I’ll try to get around to assembling them and testing them. This board has lots of possibilities. It’s initially designed to be a very stable 5v power supply for an OrangeOne Single Board Computer…. aka Orange SBC. However, 5v is also the magic number for all number of USB chargers and other goodies. So I may branch the design and create a 5v USB charger at some point in the near future. Yes, you can buy them, but most of them are not designed for 24v input current that is found on my motorhome. Besides, do you *really* think a $2 USB power source uses a design that places voltage stability high on the agenda? I don’t. By the time you factor in middlemen you are talking about a 25 cent item at the manufacturer.

My parts arrived from Tayda this weekend. It’s always fun to receive components and check them in. Boards are shipping today and I should be ready to build prototypes for the power supply and LED projects. 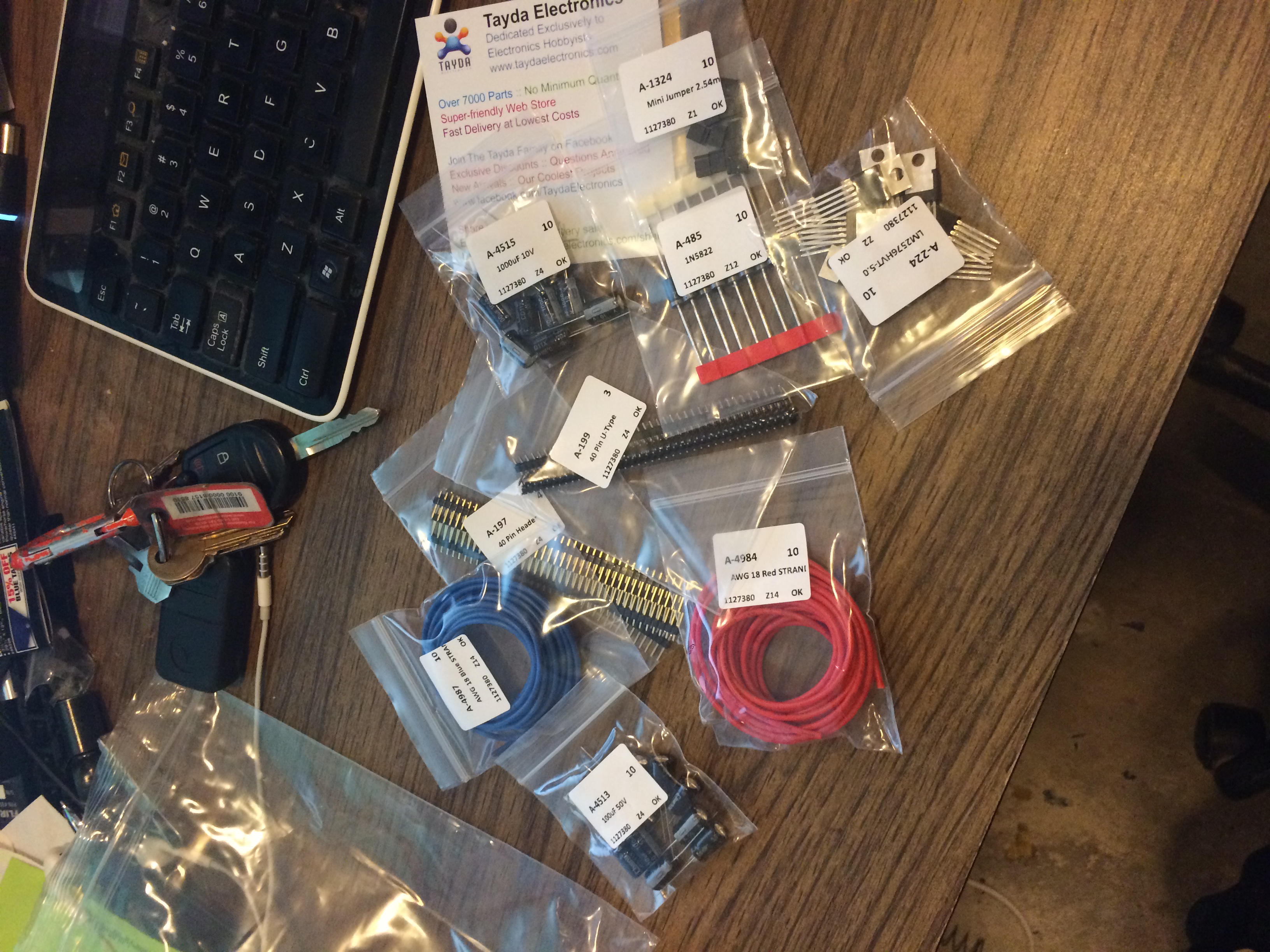 I also received my OrangePi One single board computer. It’s a $10+ embedded Linux PC. 1/2GB of ram, network, a USB port and power. 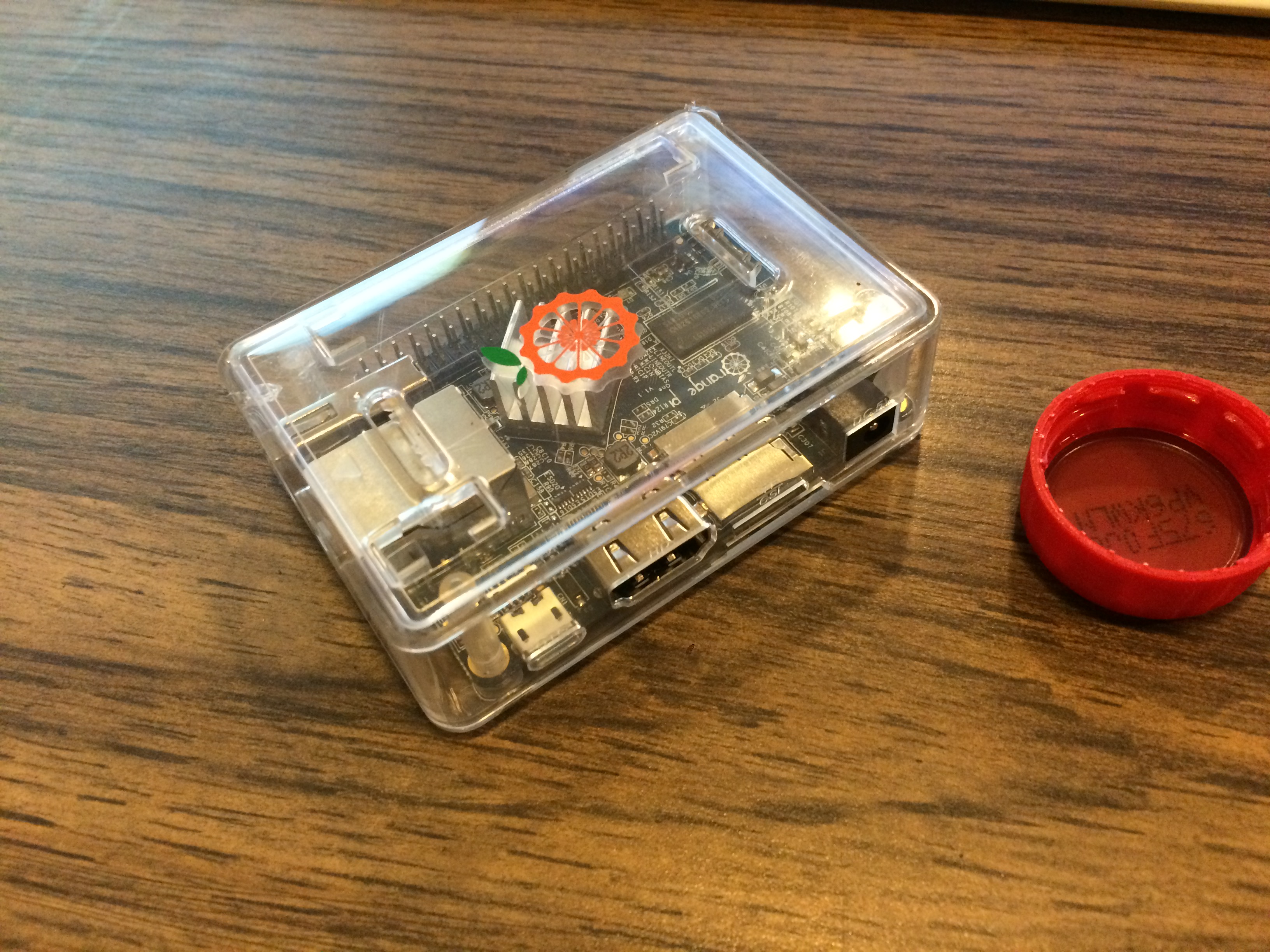 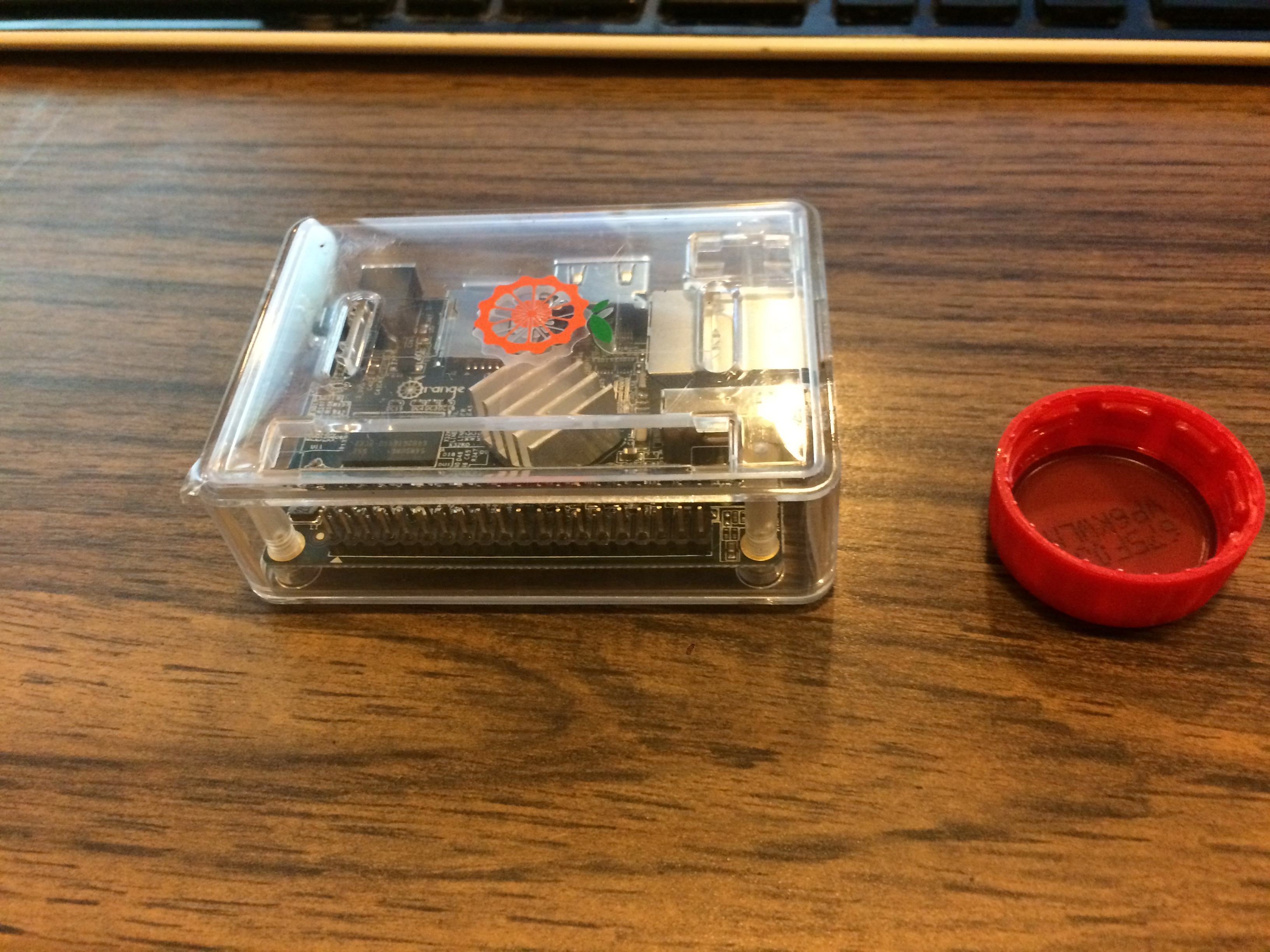 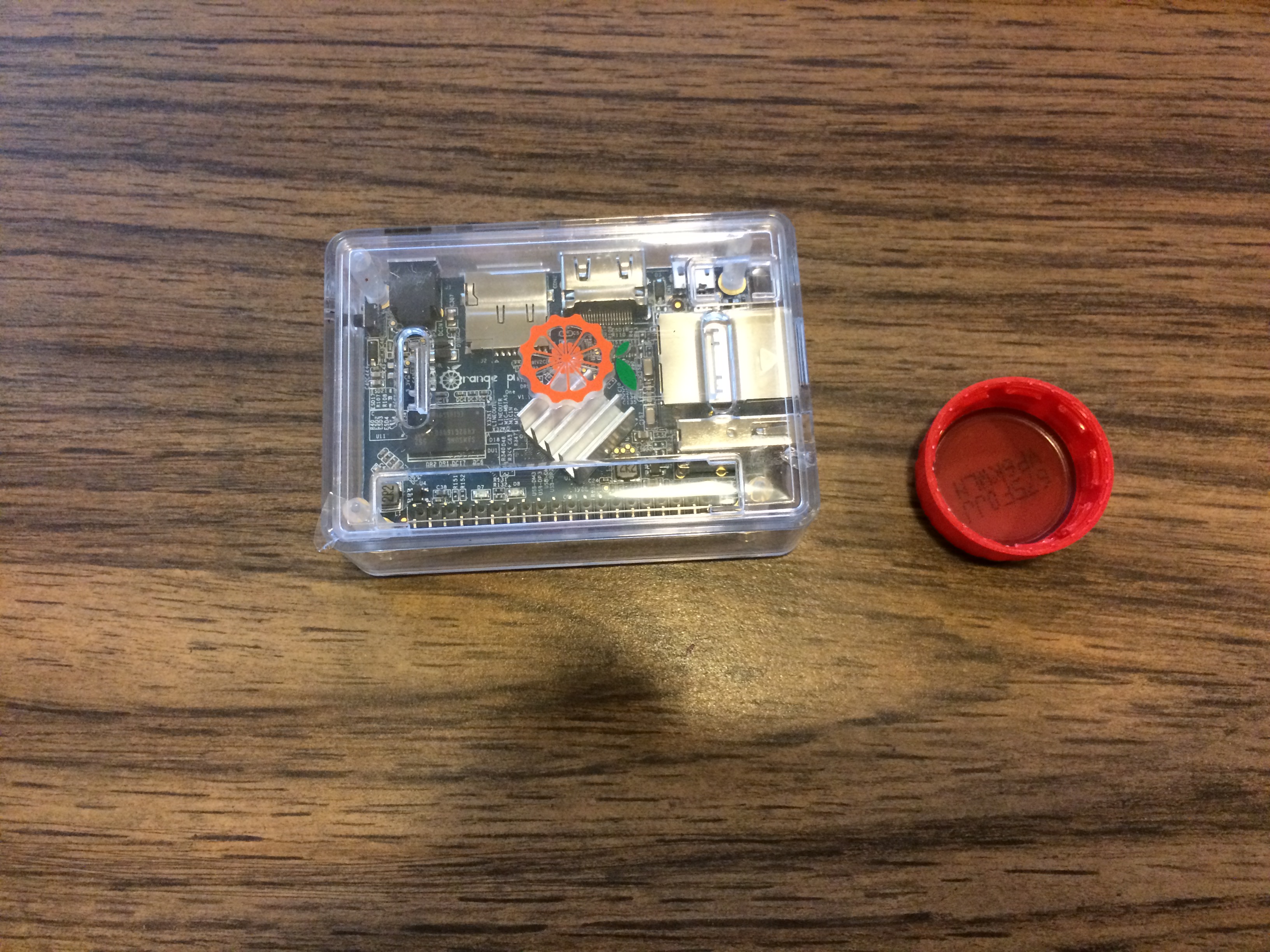 I ordered this one for about $19 from an Amazon reseller. I also ordered one on AliExpress for $9.99 with free shipping. I plan to print the case for it when it shows up, using the 3D printer. I’m building a power supply for it to use vehicle voltage to power it. That should eliminate the unique barrel connector on the power input. Once I get the kinks worked out I’ll publish the power supply.

Here’s a glance at the schematic for v1.1 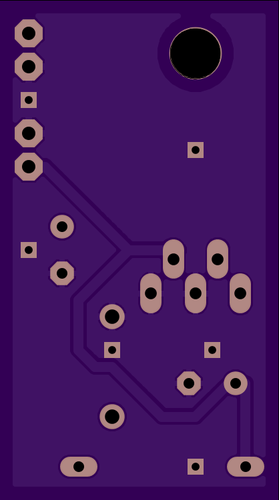 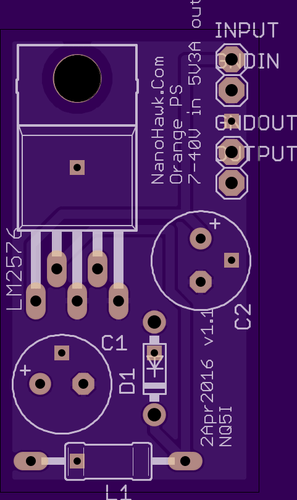 The other project is bay-light which is a light with 9 LED’s and a regulator IC so it can be powered by 12-30vDC that is typically found on vehicles. I could have purchased a light for $12 to $20, but I think these will wind up being a little cheaper. Besides, making them is half of the fun.

I am very happy to announce a return to doing business. For the last 1.5 years I had stopped selling and shipping kits. I originally anticipated it being a shorter pause. I sold one house and bought another. While I’m not done with my new house I am to a point where I can resume building and shipping kits and projects. For anyone who has patiently waited this long, thank you.

I found a neat SBC called an Orange Pi. It’s basically a Chinese knockoff of a Raspberry Pi. Similar, but not the same. The problem is that it uses a stupid 4mmx1.7mm plug which is reasonably uncommon. A few folks mentioned removing the power connector and soldering in some wires.

My eventual application is mobile, so I decided I would just design a power supply and fabricate it. A quick trip to Tayda Electronics confirmed that the switching voltage regulators were criminally cheap at 76 cents a piece. All the parts were ordered to build 10 of them for around $18.

I spent a few minutes at lunch dusting off my Eagle skills and drawing the schematic. I then arranged the board and sent it to Oshpark. I’ll receive 3 prototype boards for $6 including shipping. Not bad.

The finished unit will accept 7 to 40vdc and output 5vdc 3A. The Orange Pi requires 5v 2A so this should work just fine.

Here’s a image of what the board should look like.

I expect these to be an $8 kit when I’m done with them. It’s primary purpose is to provide a regulated 5v power supply to a mobile single board computer.